Some say Mont Ventoux is the hardest of all the mythical Tour de France climbs and rightly so. Mont Ventoux has a magnetic attraction for many cyclists. The lone giant of Provence rears up out of the French landscape to a height of 1912m.

The Mont Ventoux is situated in Provence-Alpes-Cote d'Azur and belongs to the Massif des Cèdres.  Starting from Bédoin, the Mont Ventoux ascent is 21.4 km long.  Over this distance, you climb 1639 vertically in meters.

There is no other way to describe this ride as anything other than challenging, but it is one of the Daddy of all climbs, and because of that it is a pilgrimage for fit cyclists to take on, complete, and enjoy the descent back down.  Do this and you have TICKED a huge box.

Tom Simpson was one of Britain's most successful professional cyclists.  In 1959, at age 21, Simpson was signed by the French professional road-racing team St. Raphaël-Géminiani-Dunlop. He advanced to their first team (Rapha-Gitane-Dunlop) the following year, and won the 1961 Tour of Flanders. Simpson then joined Gitane-Leroux-Dunlop; in the 1962 Tour de France he became the first British rider to wear the yellow jersey, finishing sixth overall.

In 1963 Simpson moved to Peugeot-BP-Englebert, winning Bordeaux–Paris that year and the 1964 Milan–San Remo. In 1965 he became Britain's first world road race champion and won the Giro di Lombardia; this made him the BBC Sports Personality of the Year, the first cyclist to win the award. Injuries hampered much of Simpson's 1966 season. He won two stages of the 1967 Vuelta a España before he won the general classification of Paris–Nice that year.

The mountain achieved worldwide notoriety when it claimed the life of this great English cyclist Tom, who died here on July 13th 1967.

On the 13th stage of the 1967 Tour de France, a monster 211km stage from Marseille to Carpentras ridden in temperatures in the mid 30's Tom began to weave wildly across the road before he fell down. He was delirious but then in those immortal words, asked spectators to "put me back on my bike!" He then rode to within 1.5km of the summit before collapsing, still clipped into his pedals. Sadly he died in the Helicopter on the way to Carpentras Hospital. Amphetamines were found in his jersey and bloodstream.   There is a memorial to Tom near the summit which has become a shrine to fans of cycling, who often leave small tokens of remembrance there. 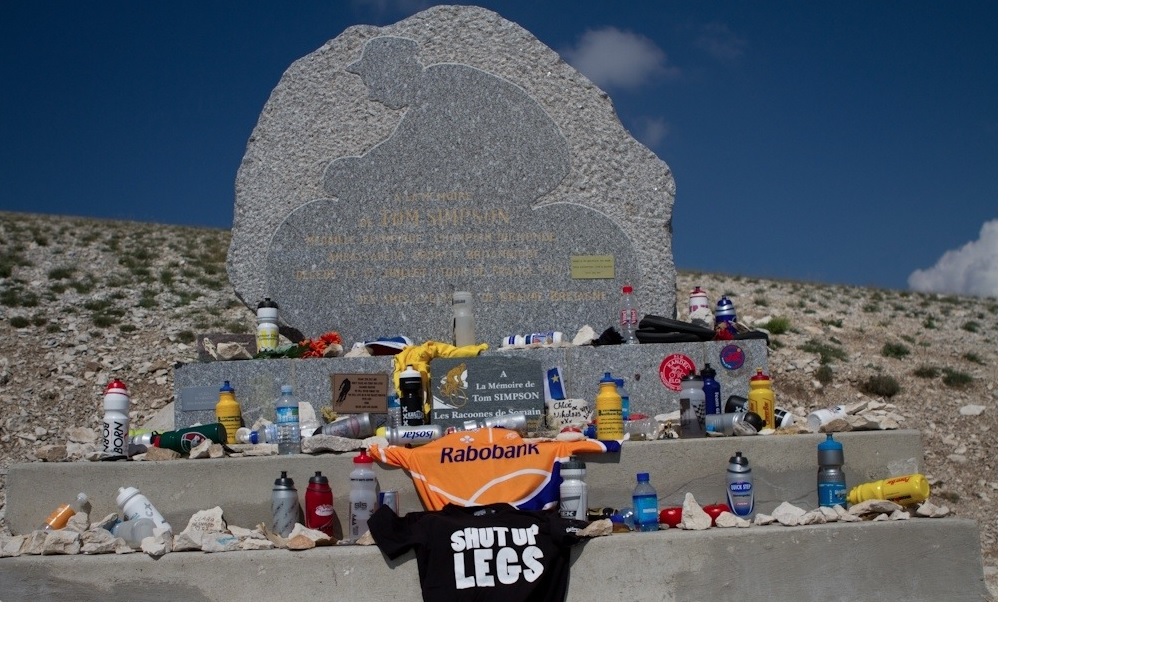 The ascent from Bedoin is the classic way up the mountain. The length of the climb from Bedoin at 300m asl to the summit at 1912m is 21.5km . This gives an elevation of 1612m and an average gradient of 7.5%. This doesn't sound too bad but when you break the climb down into its 3 obvious sections it paints a different picture.

So why the tough reputation? Well, the next section, the infamous forest has the answer. From St. Esteve at 541m it is 9.5km to Chalet Reynard at 1417m. This gives an average gradient of over 9% for the whole of this section. It is also worth remembrering that this 9% is not constant as there are a few sections as low a 7% and many over 11% and 12%.

The last 6km from Chalet Reynard are much easier than the forest section but also much more exposed and weather dependent. This section has the reputation of being very windy. However it works both ways and quite often a nice tail wind will help you to the top. As you leave Chalet Reynard you have a short steep section but as you round the first bend there is a noticeable drop in gradient with an average of approximately 7% for the next 4.5km. If you are very lucky you will have a tail wind and it will be possible to fly up this part of the climb. If you are unlucky you will be battling into the wind all the way to the top and it will feel like 12% again. The last 1500m from the Simpson Memorial are steep again at 10% but by this time you won't really care. 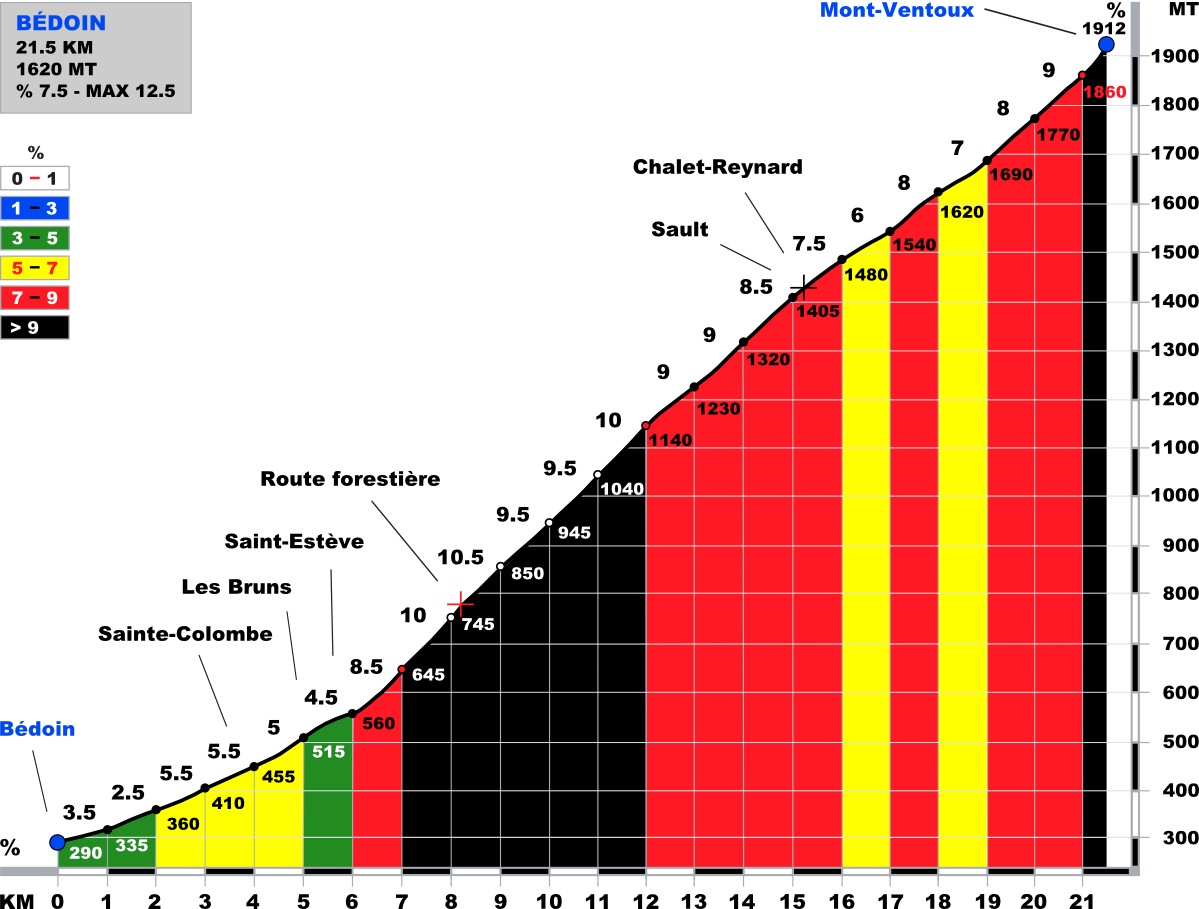